Concrete blocks with the same dimensions as the orthogonal mesh embossed on Galeria Leme’s exposed concrete façade, derived from its construction formwork. The set of blocks is placed horizontally and arranged in a composition shaping a central void in the form of a stepped cross, also called Inca cross or Chakana. Screws, nails, graphite and gold leaf on the floor and on the blocks, draw South America’s land routes.

* “Cielo Raso” is a Spanish expression that refers to the architectural structure called “dropped ceiling” or “false ceiling”. The title plays with the ambiguity of its literal translation: “Cielo” meaning sky or heaven and “Raso” meaning shallow or flat.

(click below to see the installation’s plan explaining its organization) 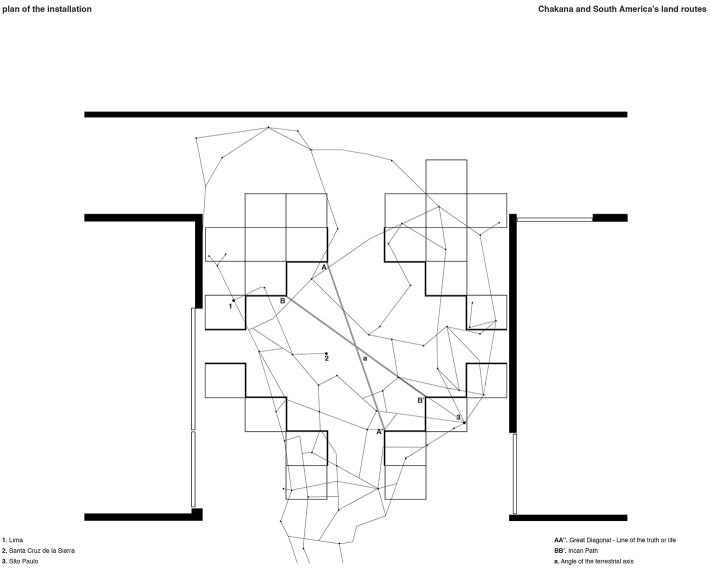 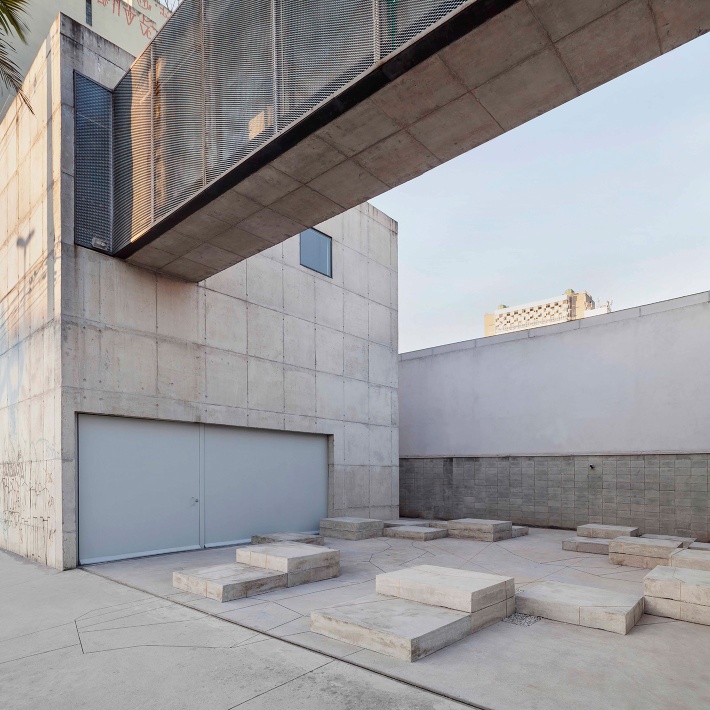 “… Born from the primary gesture of who signs a place or takes possession of it: two axes crossing each other at a right angle, that is, the very sign of the cross”

Lúcio Costa’s symbolic gesture in the design of Brasilia carries the ancient human need to locate itself in the world. With the intersection of two axes in space Man establishes the starting point for the set of coordinates that locates and relates him to his surroundings. The geometric figure originated by this intersection, the cross, is one of the earliest symbols in human history. Since the Neolithic period, the use of different types of crosses indicates the different ways of being, physically and ideologically, in the world. To both horizontal axes (x, y) a vertical one (z) is intersected, related to the upright position of the human body. It not only establishes tridimensional space, but also creates a symbolic bridge between the human and the divine, represented by the sky. The reciprocity between the understanding of the territory and of the cosmos has guided the discovery of new worlds, nurtured beliefs and located cities and buildings, shaping different forms of human life. By connecting the points of the stellar grid each civilization drew its own physiognomy, tracing in the sky a myriad of cosmic maps with the common desire of locating themselves. Through disparate drawings and interpretations one finds a shared symbol that synthesizes this human yearning, a cross, drawn by connecting four celestial bodies, the Southern Cross.

Its symbolic strength runs through different cultures and notions of astronomy, from the western to the aboriginal and indigenous of the southern hemisphere. In Quechua, one of the Inca languages, the Southern Cross is called Chakana, which is also the name of the Inca cross, a central symbol for pre-Columbian cultures. A squared and stepped cross with twelve corners, its geometry is completely based on observations of the celestial bodies and nature cycles. Its four sides represent the four directions and the four seasons and each segment is divided into three steps symbolizing the worlds of gods, men and the dead.

While in most crosses the intersection point of both lines defines the basic-coordinate of man’s place in the world, in the Chakana this intersection does not exist, it is a circular void. For the Andean mythology the center of this cross represents the unknown, the unimaginable and the sacred. Hence, the Chakana’s symbolism and geometry seem to deny the determinism of this basic-coordinate towards other notions of space-time. Such a way of understanding the human relationship to its world does not mean an imprecision in the definition and planning of space. Several pre-Columbian settlements used an orthogonal geometric grid both at the urban and the building scale, not very different from the one we know today. But the pre-Columbian grid goes beyond the mere rational appropriation of space through geometry and mathematics. It is inserted within a larger logic established by nature and the cosmos. It is the means to establish a complete union between human life/culture, nature and the divine. This notion of geometry, synthesized in the sacred shape of the Chakana, exists beyond the architectural lexicon to various other elements of daily life, right down to the body, expressed in the geometric mesh of textiles or the ritualistic paintings on the skin.

To this symbolic-spatial understanding of geometry, centuries later, another one was overlapped. It was brought by the Spanish colonizers and used in the design of their new cities. In spite of the formal similarities to the pre-Columbian matrix, this western grid allied itself to an impetus towards the future and represented the human order before the “chaos” of nature and of the pre-existing historical narratives. This new system made new notions of land ownership tangible and emphasized the public-private dichotomy, introducing ways of understanding reality that were contrary to those of the colonized populations. This grid was configured as a transculturation strategy through a direct intervention in space and in the body. Such modus operandi was subsequently repeated in several modernist plans established under another set of global principles which reaffirmed the grid as a means for applying a rational logic of serialization and standardization of spaces, products and forms of life.

In a limbo between being a tool for understanding the world and an active instrument for its construction, this geometric system is configured as a cultural structure, built by both scientific and measurable procedures as well as spiritual, political or moral positions. It is a symbolic-spatial mechanism adapted to the needs and interests of those who produce it and consequently determines the scripts of everyday life as well as distinctive worldviews.