Replica of the clock tower from Estação da Luz (Luz Station) installed horizontally over Leme gallery’s building. During the exhibition the tower is shifted once, assuming a second position on the roof.

1 – Estação da Luz: Railway station whose metallic structure was brought from the United Kingdom. Since 1867 it underwent continuous modifications and reconstructions; Built in 1870, rebuilt between 1895 and 1901 (current project), destroyed by a fire in 1946, rebuilt between 1947 and 1951, modified from 2004 to 2006, half destroyed by another fire in 2015 and currently undergoing a partial restructuring until 2018.

2 – Leme gallery: Built in 2004, demolished in 2011 and rebuilt the same year a few meters from its original location. The current building is a replica of the initial project to which an adjacent building was added. 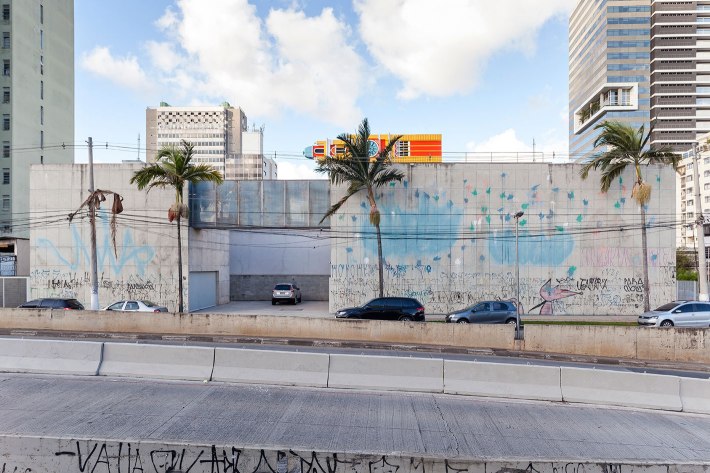 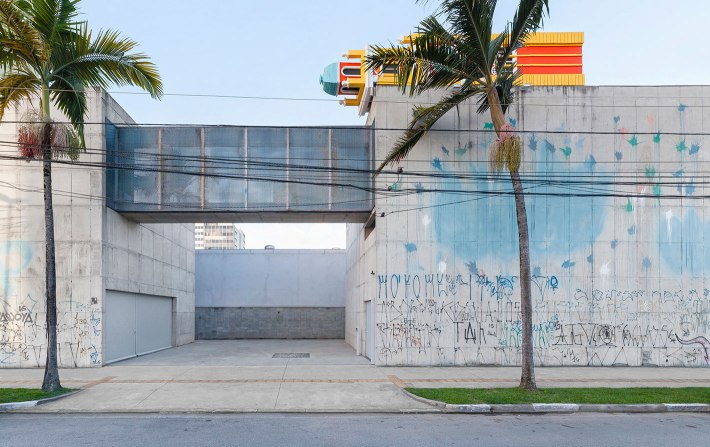 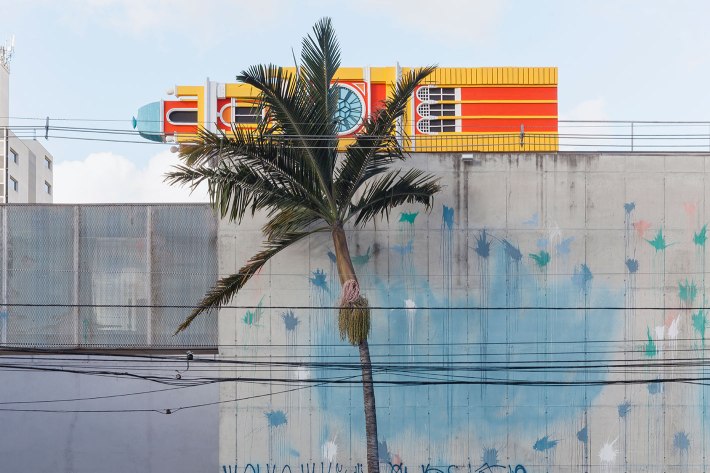 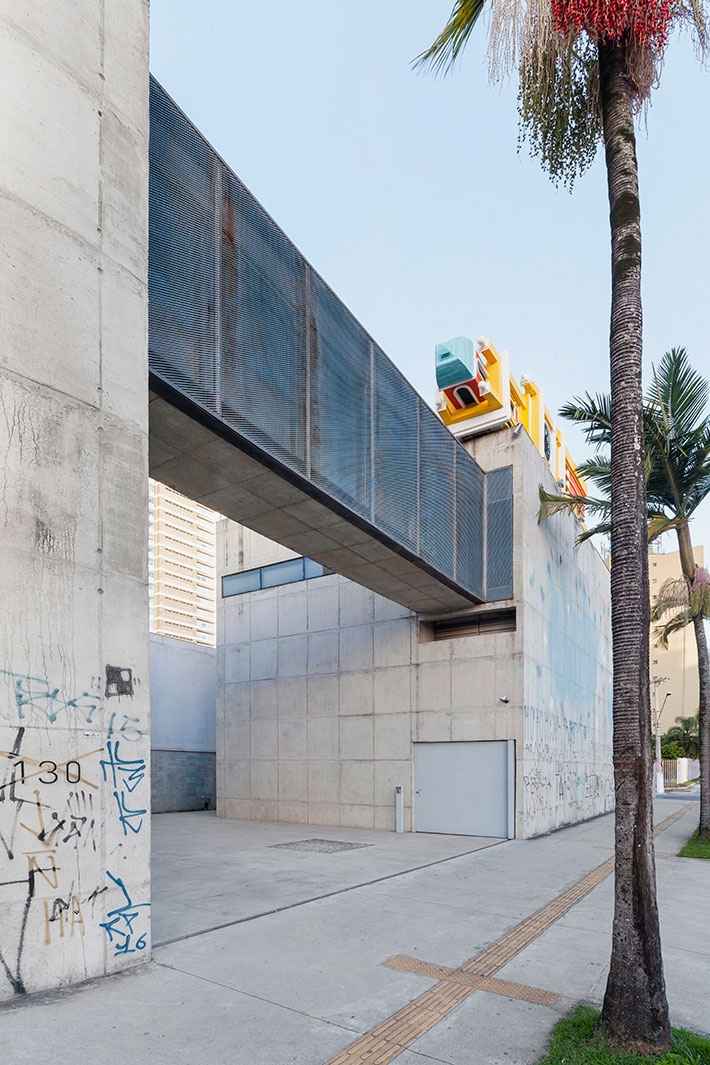 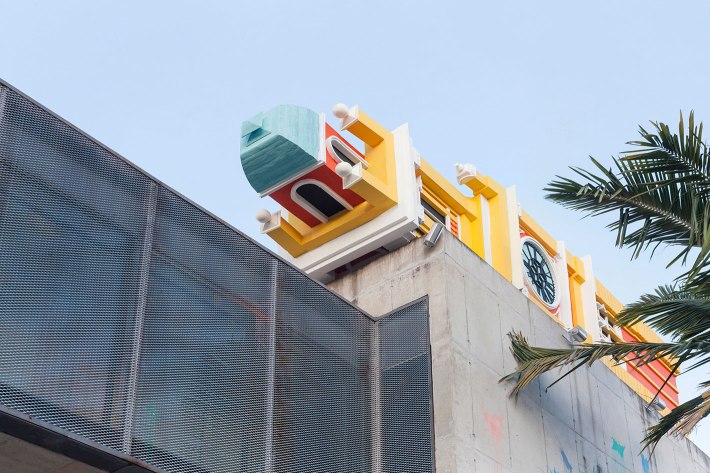 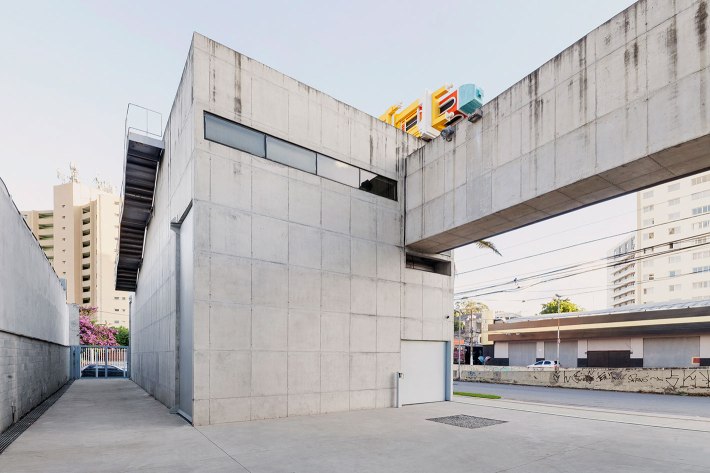 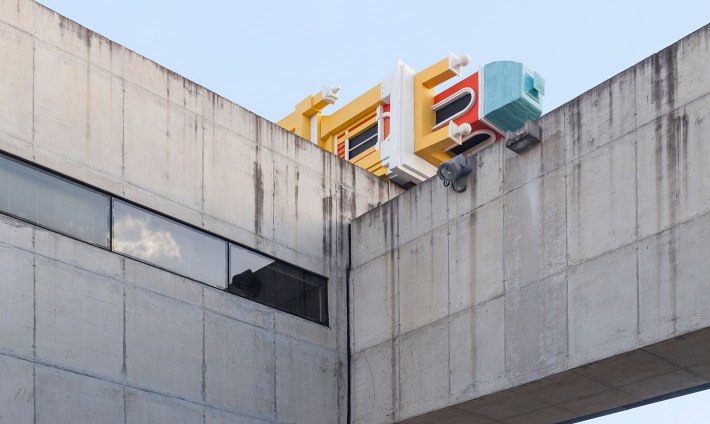 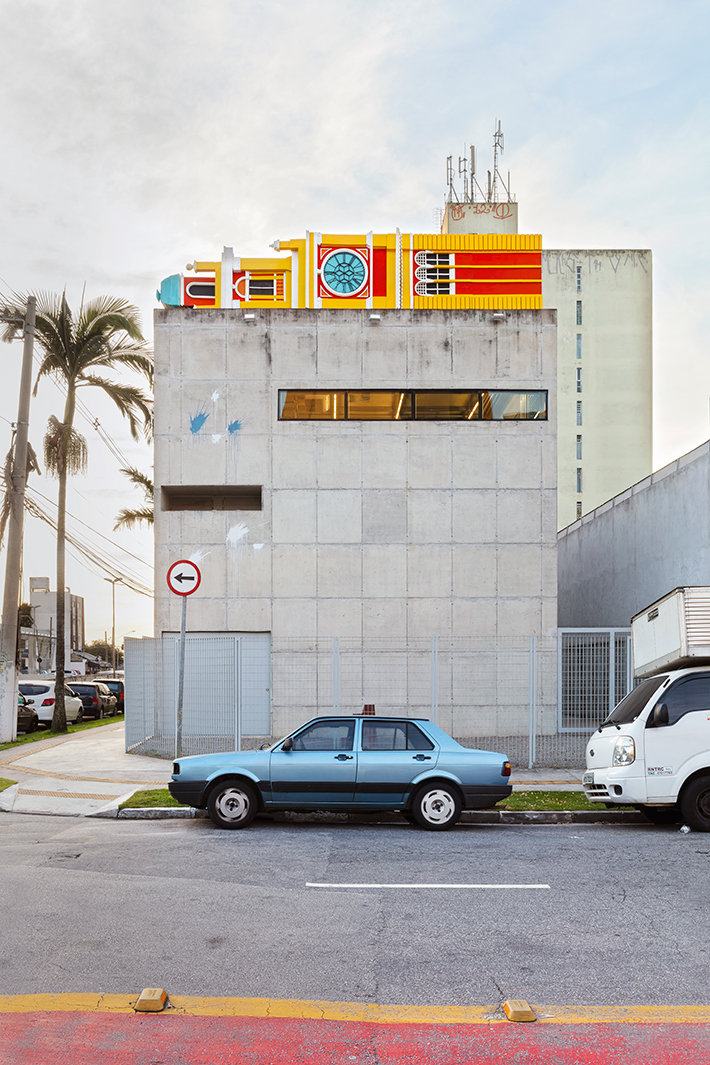 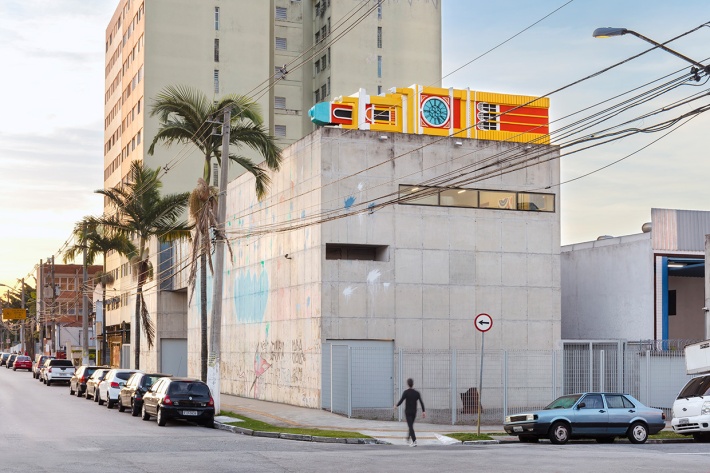 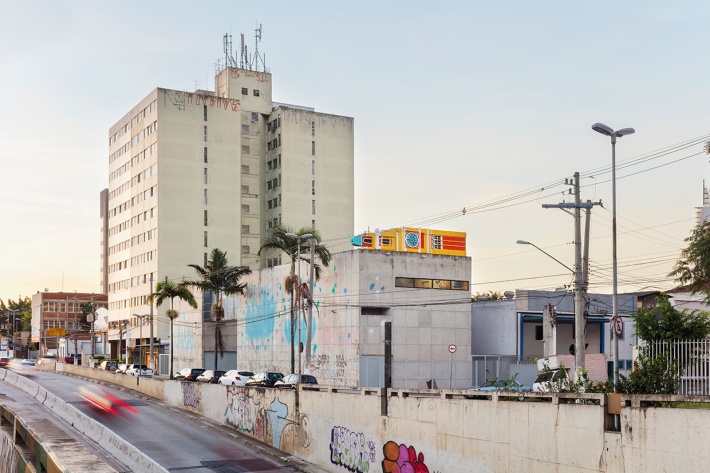 The figure of time looms over man from the moment when he is faced with the immanent transience of his physical environment. Time is simultaneously a personal, existential and subjective experience, as well as something that connects the individual to larger, natural, social forces, among many unfathomable others. The human need to understand himself belonging to a continuum that makes his existence intelligible is expressed by the desire to synchronize his periodic events (celebrations, holidays, etc.) to the cyclical character of the movements of nature and the celestial bodies (solstices, moon phases, seasons, etc.), as well as to a genealogy of past events that form a common history. “Minutes” and “seconds” are not only intervals of time, but also angular measurements of distances on the earth’s surface that accurately determine Man’s position in territory. Time shelters and locates us. It is a way to measure the relative interval between sequences of events, just as distance does it to the positions of bodies in space.[1]

The change of position in time is what we understand as “movement,” a concept that combines the inseparability of the notions of space and time. The possibility of an increasingly faster displacement through territory was one of the main boosters for a radical change in the contemporary conception of time. The factor that consummated it was the advent of rail transport, resulting from the Industrial Revolution in Great Britain. The rapidity of this collective transportation allowed the crossing of several municipalities with distinct local hours, each one empirically based on the position of the Sun. When going through a myriad of local times, the constant readjustment of clocks became necessary, as any mistake or imprecision could cause delays or accidents. Increasing the efficiency and safety of this process made it urgent to create a shared benchmark for determining time. Thus, before any political or scientific conventions, railway companies were the first to implement Standard Time, instituting London as a reference from which all other time zones were calculated. After this convention, railway station watches acquired two groups of pointers, one marking the local time and the other showing the “Railway Time”. Gradually the “standard” was imposed to the “local” and in the second half of the nineteenth century the first model for international civil-time was established with the formalization of Greenwich as the prime meridian from which the earth’s surface was divided into 24 time zones.

The implementation of this abstract convention in parallel to the worldwide diffusion of rail transport signaled the arrival of another global temporality associated with new forms of movement that carried hegemonic and Eurocentric ideals of modernity, reason and progress. This spatiotemporal colonization was imposed both by the transfiguration of abstract notions of time-space and also by a direct action over the built environment. Such physical intervention was potentiated by the ease of manufacture and global transportation of prefabricated industrial parts, ranging from small components to structural and ornamental elements of large buildings. One of the most widespread and symptomatic symbols of this spatiotemporal transculturation process is the railway stations’ clock tower. The notion of public time associated with the monumentality of the tower is a recurring feature in many cultures throughout the history of mankind. But the cyclopean presence of railway clock towers expressed another notion of time. One that subordinated all citizens to an automated existence of precision, uniformity and efficiency based on a “time economy” and on a new “value of time” which were strongly related to the uninterrupted flow of people and goods across the territory.[2]

The prominent presence in the city of such watches seems to foresee the newly conquered supremacy of time over space. Being unable to act directly on abstract dimensions, Man acts upon space as a means of controlling time.[3] In this way, the city is not only a fortuitous result of the accumulation of disparate temporalities, but also structured in order to impose certain times upon its citizens. The optimization of the duration of the displacement of people, for example, is a key factor in the organization of urban space and in the social domination exerted by it. The control of the times of dislocation within cities is one of the main mechanisms of socio-spatial segregation, having very evident reverberations in the territorial hierarchy expressed in the dichotomy between center and periphery and in the oscillation of land prices areas with different degrees of accessibility, to cite a few examples. On the other hand, the acceleration of the time of mutation of the city, based on demolition-construction processes, establishes a volatile public sphere that echoes a disposability of any physical structure as well as of the life of its inhabitants. Such space produces an amnesic time, incapable of apprehending the constant becoming, displacement and disappearance of its physical environment.

[i] RADOVAN, Mario. On the Nature of Time, Rijeka University, Rijeka, Croatia, 2015.

The sixth edition of SITU counts with the support of: