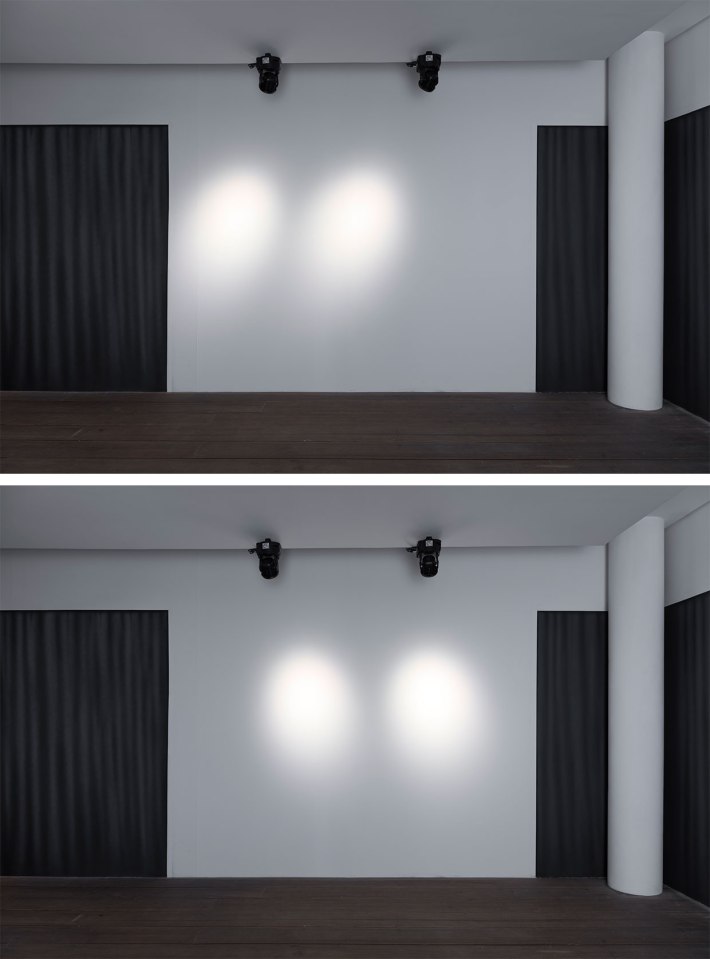 Seasick, 2015_moving-heads, table of light and painting on the walls representing curtains and executed by a graffiti artist hired by the artist. The spotlights move horizontally in sync_Variable dimensions_Photos: Edouard Fraipont

The familiar appearance that is intuitively attributed to the works of Ana Dias Batista is contradicted, with a closer look, by a set of enigmatic configurations that disrupt the normal behavior of these elements, but which paradoxically, seem to have always belonged to them. Through succinct procedures, related to the same logics, techniques and uses that are associated with these everyday-items, the artist captures their formlessness and transfigures them, resignifying their material presence and distinguishing them from the other “things”. But these set of attributes that singularize “the work” seem to coexist in equivalence with those characteristics that are banally ascribed to the common thing. Therefore, each one of Dias Batista’s artworks continually tests its status and autonomy in face of ordinary objects, procedures and spaces.

Both the guidelines established for the production of her artworks and the procedures subsequently applied to them, reiterate an interchangeability between reference and referent. The artist is interested in elements that have become obsolescent, as if they were freed from their original uses, and also in those who cite others but which have acquired autonomy from their referents and genealogy. Dias Batista delegates the execution of her pieces to the same professionals who would produce the standard thing, but subverts and reformulates their processes, creating an additional effort that transforms the normalized work into an activity that eludes practicality and an objective purpose. She also explores other procedures such as variations in scale, but changes the common use of this mathematical correlation that allows one to associate the dimensions of the “real” with its bi- or three-dimensional representation. These and other methodologies create denatured and emancipated objects, deregulating the intellectual and physical perception that the viewer establishes with them.

The spectator’s encounter with the work is further enhanced by the artist’s exceptional attention to the spatial context in which they are situated. Her pieces often operate as reiterations of the spaces they are in; either by emphasizing the inherent tendencies of the places, by distorting their materiality, or even by inventing false constructions that establish a relationship with the original configurations of the site. The firsthand experience of this relation between work and space suggests that Dias Batista’s pieces could share properties with the place that surrounds them. Thus creating a strong correlation between the “world” and the “work” and an interplay between what is the “content” and what is its “container”. There is a sense that each one of the parties claims its autonomy in relation to the others, but simultaneously that all of them share a joint intelligence.

This paradoxical feature is latent in a transversal reading of Ana Dias Batista’s oeuvre. As much as one can understand a strong coherence and even name some tendencies within her artistic research, there are also visible sets of strategies that intentionally interrupt any immediate comprehension of the whole. Her pieces test and reflect upon the operations and mechanisms that are intrinsic to their own existence. But simultaneously escape from any theoretical rumination that could attach them to exemplary contents. Her work is a result of an responsiveness to its social context, but any critical content is not given positively, as an end, but only as an interruption. Thereby, the artist sharply addresses the arbitrariness of certain social structures and rituals, but does it without accusation, explicit criticism nor by taking any ideological side. And, when it seems that the work has finally made itself known, it creates a twist in the plot, presenting new clues to other conclusions. 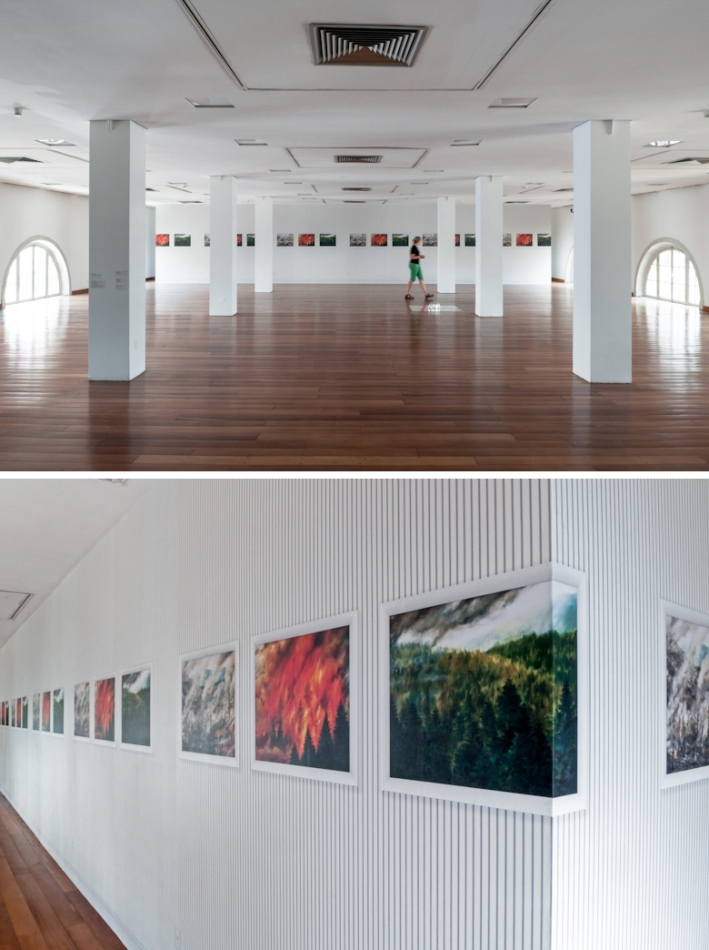 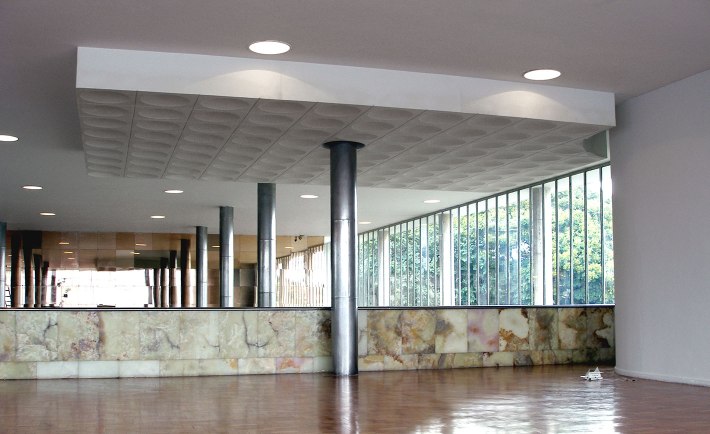 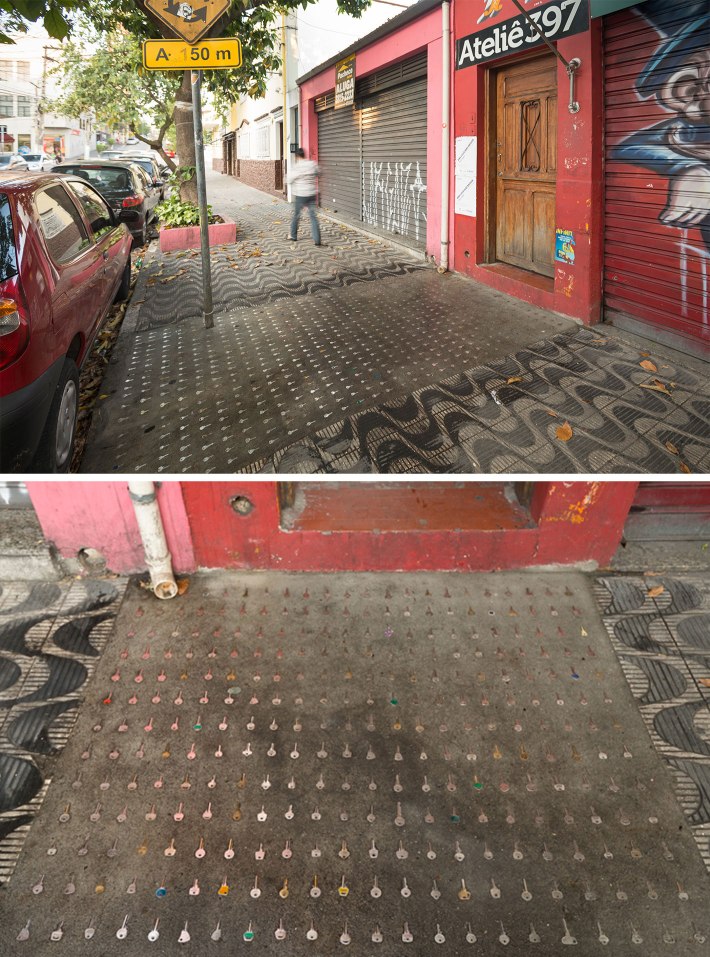 Faça aqui (sidewalk), 2015_ccement floor with keys in regular arrangement, among which is the one that opens the doors of Ateliê397. The work also included a floor in the inner corridor, where keys were randomly distributed_Exhibition “Faça aqui”, Ateliê397, São Paulo, Brazil_Photos: Edouard Fraipont

Panel, 2015_collection of used advertising key signs that were traded (bought or exchanged for new parts) with locksmiths from the city of São Paulo. From each original was made a random number of replicas in raw MDF. The models were distributed on the wall in reference to the panels which, at locksmith kiosks, contain the actual keys that have not yet been recorded._260 x 650 cm_Exhibition “Faça aqui”, Ateliê397, São Paulo, Brazil 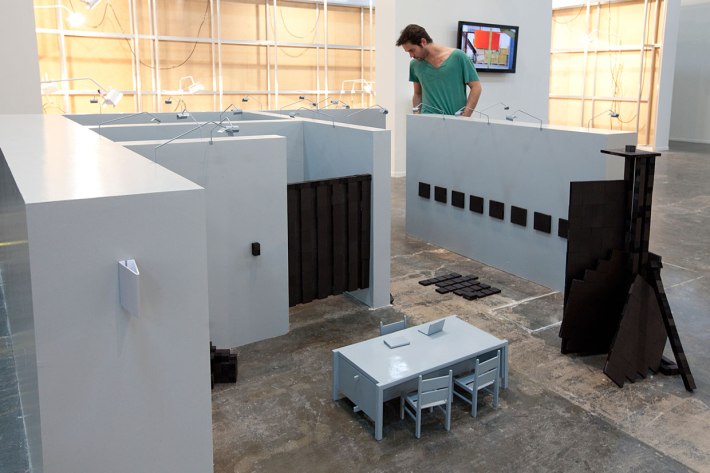 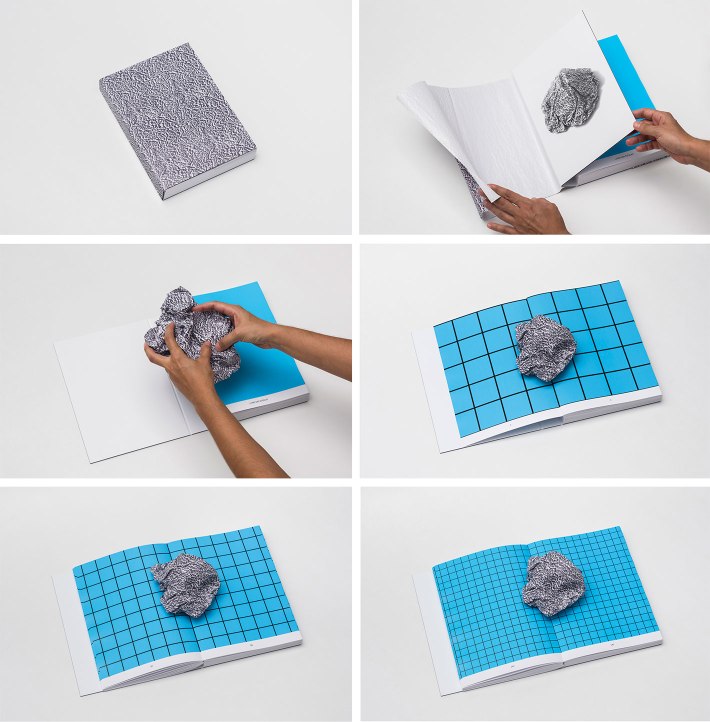