Painting made by a graffiti artist with a drawing of a stone wall painted over a segment of the facade. The graffiti partially overlaps a group of marks (tags, drawings, “pichações” – a type of street writing that is characteristic of Brazil) that already existed on the facade. The “stone wall” motif is commonly found throughout the city of São Paulo and it is used to cover or curb unwanted paintings over the walls of private properties.

Concrete roadblocks, commonly called “turtles”, painted with the same pattern as the facade’s graffiti. The pieces are distributed all over the building’s courtyard, which is open to the public space but also functions as a private parking lot. 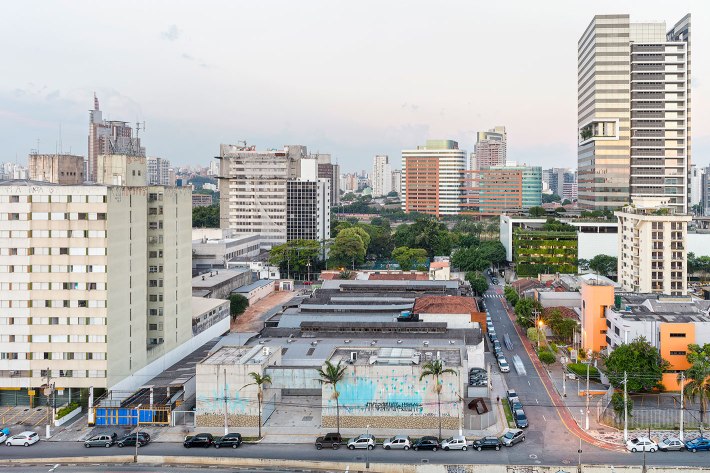 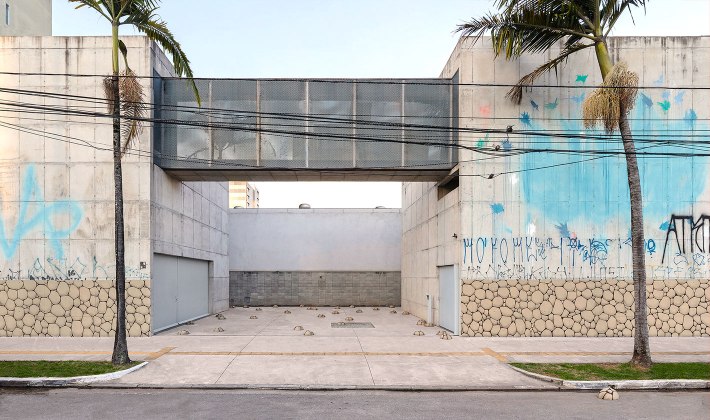 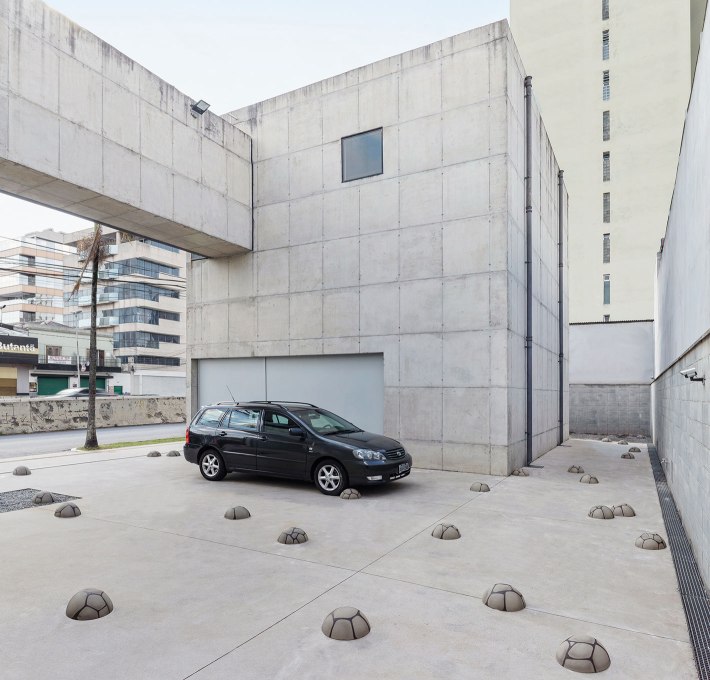 from contract to counter-narrative

In the anonymity of daily urban life, where dialogue with the fellow citizen can be easily avoided, the city imposes a constant and inescapable interlocution, acting as a communicational interface between the subject who lives it and a multiplicity of discourses that shape its territory. The urban space is a result of the sedimentation and embodiment of a series of narratives belonging to different times, authors and ideologies. But its polysemy is regulated and homogenized by an official discourse that disseminates a set of public values and norms. They serve to organize and assist the city’s daily life, but also to control and prevent any kind of expression that goes against the authorized. Such codes of conduct not only merge with the visual vocabulary of the city, becoming inseparable from the way it is read. But are also embodied in elements whose presence conditions the free transit of citizens, becoming indivisible from their physical experience of space. Such strategies, from the most subliminal to those that virtually preclude any contestation, are implemented from the scale of the body to the scale of the metropolis, gradually shaping the individual’s self-image and civic consciousness.

But this process is not unidirectional. The city’s own identity is constantly renewed through the countless discursive representations that are juxtaposed to it. These movements destabilize the metropolis’ normativity and impregnate it with narratives that are not committed to the official ones. More than an invitation to interlocution, these manifestations redefine the spaces of speech in relation to the prevailing discourse. Their language is also public, but it does not go through the official control. Their iconography is the result of a collective and subjective consciousness, but it is not subjected to the standardization of urban legislation. Their formalization is not tied to the aesthetic standards that are legitimized by the dominant culture, which nevertheless tries to incorporate and tame it, recognizing it as an aesthetic possibility and thus annulling its resistant and marginal character. In other cases, it simply expresses the taste of a particular social group, and the specificity of its communicational codes can break the narrowness of social relations reified by visual marketing and sour a fictitious consensus, officially instituted as a principle and goal rather than as a result of a discussion and negotiation of divergent interests. Such counter-narratives, from the subversive to those without critical pretenses, create fissures in the city that allow for a glimpse of the dissemblance between the discourse that refers to the city and the others that arises from it.

Maintaining this discrepancy is essential to sustain the narrative about a controlled and undisturbed city. A metropolis that is “requalified”, “sanitized” and “iconified” by large enterprises that invigorate the market and commercialize a generic sense of “civic pride”. This condition institutes depoliticized commodity-spaces, which not only exempt themselves of any responsibility over the source of urban problems but also camouflage the mechanisms and consequences of their production. This creates an environment whose narratives not only serve to regulate but also to produce simulacra, persuading and satisfying part of the population and excluding all others that do not fit the desired profile. Under a rhetoric of urban pacification, such discourses generate an aestheticization of fear, supported by stereotyped notions of marginality, delinquency, and criminality. This situation encourages more explicit forms of control and exclusion, reiterating the need for a spatial fortification of the city and the urgency of purging any deviant languages, especially those that use the built environment as their primary means of diffusion.

The fight against the symbolic claim of space that is in opposition to the dominant discourse is justified as a measure to prevent the depredation of the built environment and validated on the grounds of urban beautification and cleansing, among others. Paradoxically many of these official strategies end up becoming stains on a supposedly “normalized” and “appeased” city. Other variations of these same mechanisms arise, but they operate in disguise. Some, for instance, co-opt the counter-narratives thus annulling their subversive nature. While others avoid an illicit language through the use of their congener languages, as in the case of graffiti that is used to prevent “pichações”[i], playing with a code of conduct between different agents. These and other strategies are gradually integrated into the urban glossary and are disseminated and reinterpreted by each social group or individual, therefore being adapted to the specificity of their contexts and criteria. In this way, new defensive vocabularies are created and replicated ad infinitum, which makes them increasingly autonomous from their original purpose. They end up restraining everyone and no one, creating places that are marked by a subliminal and ambiguous tension, where there is a blurring of what controls and what is controlled, what threatens and what is threatened.

[i] Distinctive street writing that is characteristic from Brazilian metropolises such as São Paulo and Rio de Janeiro.

The seventh edition of SITU counts with the support of: